The creation of JTC 1/SC 31 is a fortunate confluence of two distinctly different but parallel efforts which resulted in the establishment of SC 31.  It may never be known if either or both of the two efforts might have succeeded independent of the other, but it is clearly evident that the formation of SC 31 was expedited by this two-pronged effort.

JTC 1 was formed in 1987, merging the efforts of ISO TC 97 (Information Technology) and two IEC committees, IEC/TC 83 (Information Technology Equipment) and IEC/TC 47/SC 47B (Semiconductor Devices) into a single committee jointly parented by ISO and IEC, to address the various aspects of “information processing systems”.  At the time of JTC 1’s formation the primary methods of getting data to the computer were keyboard, computer-to-computer communications, and card technology.

While computers operated at thousands of cycles per second and were 100% accurate, assuming the programming was correct, the method of getting the data to the computer was an error-prone method of key-entry, suffering about 1 error in every 300 characters entered.

Emerging parallel to the effort to standardize computing technology were methods of tying together physical objects as they moved from point-to-point.  Most notable in this effort was the Automatic Car Identification (ACI) colour bar code system inaugurated by the North American Railroads in the late 1960’s, the grocery inter-industry product identification code program in 1969, the Plessey bar code use in European libraries in 1971, the use of Codabar by FedEx (1978) and the blood bank industry (1977), the U.S. Department of Defense standardized bar code marking in 1982, the automotive industry bar code program beginning with the publication of the AIAG B-1 symbology standard in 1984, and the health industry bar code standard HIBC in 1984, as well.  By 1982 there were 45 identified methods of arranging bars and spaces to encode and convey information.

The first national standard for bar code technology was published as the American National Standard for materials handling — bar code symbols on unit loads and transport packages, in 1983.  This standard recommended three of the growing number of bar code standards for use on shipping labels.  Soon there were bar code standards published by private organizations, trade associations, consortia, and government agencies.  Various industries were employing different methods of print quality and identifying fields of data.  It quickly became evident that common, international standards were required if the industry was to truly flourish.

In February 1994 Craig Harmon wrote to Mike Hogan at JTC 1 and in March 1994 made a presentation to JTC 1 in Phoenix, Arizona asking to establish a new subcommittee to address automatic data capture.  From that request, an ad hoc committee was formed, which provided its recommendations in November 1995 for a new JTC 1/SC to be formed.

In the mid-1990’s, the Uniform Code Council (predecessor to today’s GS1 US) found that its automatic identification standards (most notably the UPC) had attained widespread acceptance in the United States within the consumer goods industry.  Its global counterpart EAN (predecessor to GS1) was working towards the same degree of acceptance in those industries worldwide.  The UCC believed that its standards should move into other industries.  It decided that this could be facilitated if its standards bore the imprimatur in the US of being an American National Standard, endorsed by the American National Standards Institute (ANSI).

Accordingly, the UCC joined ANSI and put a number of its standards through the ANSI process.  Once a part of ANSI, the UCC learned of ANSI’s Information Systems Standards Board (ISSB) and joined this group.  The ISSB was intimately involved with the US participation in ISO/IEC JTC 1.

In this way, the UCC began to explore how to make its standards internationally recognized by ISO.  As it studied the issue and discussed it with international experts, the concept of creating a new subcommittee within JTC 1 began to appear desirable.  In 1995, working with the ISSB and the US TAG to JTC 1, the UCC began to develop a proposal to create a new SC, SC 31, in the field of automatic data capture.

In December 1995, this proposal was adopted by the US TAG to JTC 1 for presentation at the next JTC 1 meeting.  Richard Gibson of the US, then chair of JTC 1, agreed to take the lead at the JTC 1 meeting in Sydney Australia in presenting the proposal for a new SC.

The Realization of SC 31

SC 31 was created by Resolution 4 of the 11-15 March 1996 meeting of JTC 1 in Sydney Australia.  ISO/IEC JTC1/SC31 on Standardization of Automatic Data Capture was given an area of work covering standardization of common coding, data format, syntax and structure, and enabling technologies to individually and uniquely identify items and entities without human intervention.   Excluded was work assigned to another international SC or TC.  The resolution also dictated that the United States provide the Chair and Secretariat and that the initial meeting be the week of 17 June 1996.

In April 1996, the UCC became the Secretariat of SC 31 and named Alan Haberman Chairman and Teresa Scheiman Secretariat.  In 2006 Mr Chuck Biss became the second Chairman of SC 31. He resigned after the 2013 Plenary followed by Dan Kimball 2014. The initial SC 31 Plenary meeting was 17-20 June 1996 in Brussels Belgium.  22 national bodies were represented (15 P members and 7 O members), as were 3 liaison bodies.  At this plenary, three Ad Hoc groups were created—Data Carrier, Data Structure, and Conformance.  (By June 1996, Dick Gibson had retired from AT&T.  He was retained by the UCC as a consultant to assist the Secretariat by making sure that all JTC 1 processes were complied with.  He served in this role for several years.)

At the second Plenary meeting, 11-13 March 1997, in Zurich Switzerland, the Ad Hoc groups became Working Groups.  A fourth Working Group, on RFID, was created at the third Plenary in January 1998 in Rio de Janeiro, Brazil. 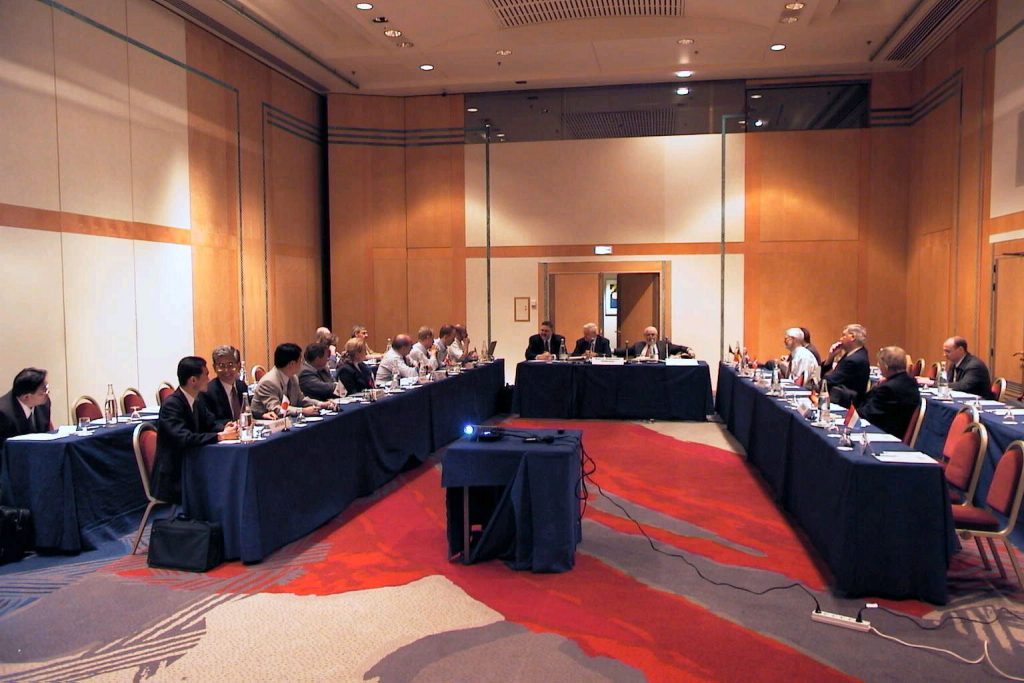 Since its inception, SC 31 has grown, not only in the areas of international specifications for linear bar codes and 2D symbols, data structure, and conformance, but also to encompass the areas of radio-frequency identification including sensor specifications, file management and security; real-time locating systems; and the integration of data collection technologies with mobile computing, mobile telephony, and web access.

The U.P.C./EAN symbols read in grocery stores around the globe today have been standardized by JTC 1/SC 31.  The social media’s QR Code, the 2011 darling of Business-to-Consumer applications, was standardized in JTC 1/SC 31 back in 2004.  All shipments to NATO forces include a label whose bar codes, 2D symbols, data structure, and print quality have all been standardized in JTC 1/SC 31.  The mobile phone aircraft boarding passes use the two-dimensional symbols of JTC 1/SC 31.  A collective effort between two JTC 1/SC 31 working groups (WG 6 and WG 1) is attempting to improve the readability of those mobile symbols.  Of all of the implementations of radio-frequency identification (RFID), the notable standards of JTC 1/SC 31, i.e. ISO/IEC 18000-63, Type C, is the most widely accepted technology.

Automatic Data Capture (ADC) technologies now referred to as Automatic Identification and Data Capture (AIDC) techniques perform two basic functions:  fast and accurate identification and data capture.  So while computers today speak of teraflops, the 118 published standards in JTC 1/SC 31 are what makes those processing speeds fast and accurate from the point of data capture to the point of actionable intelligence.

The editor of the 2012 revision of the history of SC 31 thanked Mr Craig K. Harmon (President QED Systems) and Mr Stephen Brown (former Legal Counsel for the Uniform Code Council) for the source material used to create this history.  Regrettably Craig Harmon (1947-2014), one of the co-founders of SC 31 (see chapter „The MHIA Effort“) passed away all of a sudden in 2014. By his engagement and his talent to move standards forward and to manage controversial issues he contributed to the success of SC31 to a great extent. One of his outstanding projects was the development of the 5-language Harmonized vocabulary ISO/IEC 19762 (en, fr, ge, ko, ru).

As part of information technologies, SC 31 is keeping addressing the requirements of new AIDC applications like for Internet of Things (IoT) and Machine to Machine communication (M2M). The project „ISO/IEC 20248 Digital Signature“ shows the dynamic of the developments supplying a tool for implementation of required security features of authenticity and correctness of code contents independent of the AIDC media (Barcode or RFID).

At the 2016 Plenary meeting in Sapporo, SC 31 recognized the 20th Anniversary of ISO/IEC JTC 1/SC 31 and acknowledged the dedication and experience of its member national bodies and technical experts and thanked them for their work. 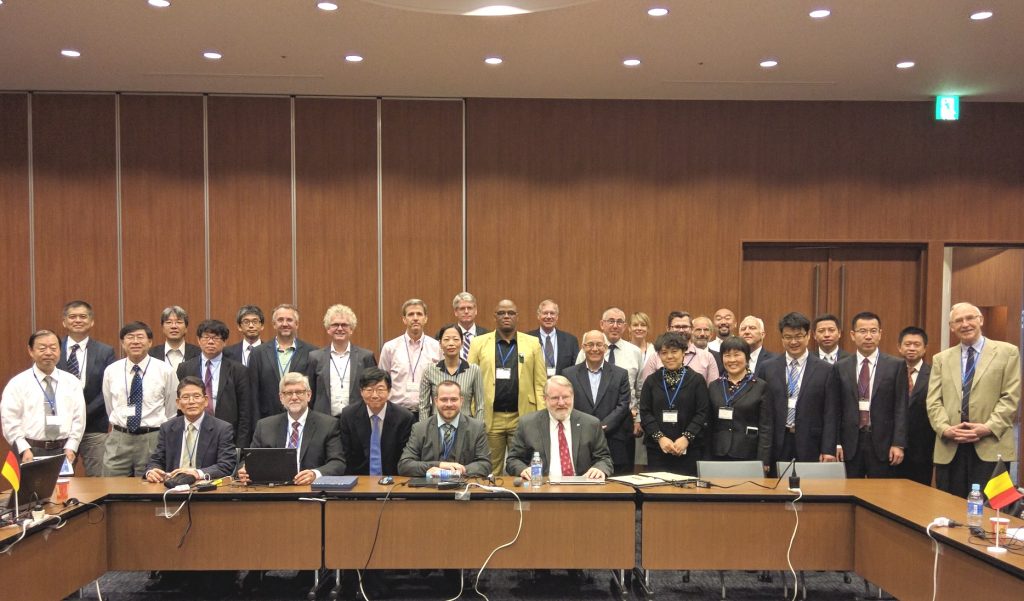 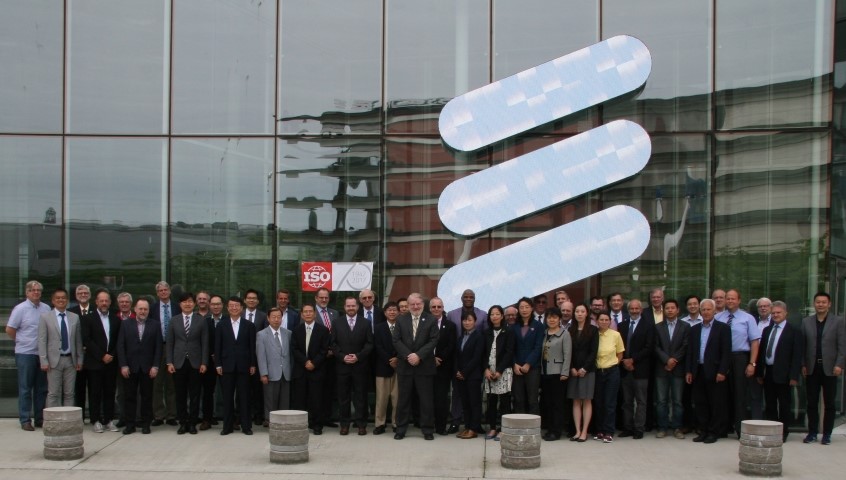 Prior to the event the CEN TC 225 Plenary meeting was held in Stockholm as well. The CEN/TC225 Chairman Claude Tételin invited the experts of SC 31 to join the meeting as guests which was appreciated very much as a signal of close cooperation.

SC 31 established its new Working group “WG 8 Application of AIDC standards”. The purpose of the WG 8 is to develop AIDC application standards and assist SC 31 and it’s WGs in promoting and being the external focal point for its work. 8 The Convenor of WG 8 is Chuck Evanhoe of the United States. The 23rd Plenary was the last meeting for Toshihiro Yoshioka, the Convenor of WG 2. The new WG 2 Convenor is Joo-Sang Park of Korea. The 23rd Plenary was also the last for the third SC 31 Chairman, Dan Kimball.  The JTC 1 Plenary held in Vladivostok in October 2017 appointed Henri Barthel chairman of SC 31 for a three-years term. Henri has been involved in SC 31 since its inception in 1996. He was Convenor of the SC 31 Working Group 4 on RFID between 1998 and 2015 and chairman of CEN TC 225 from 2009 to 2015.

In June 2018, the 24th plenary meeting was held in Chicago, Illinois, USA at the University of Chicago Gleacher Center.

Forty-seven people from 12 countries and two liaison organizations attended the meetings. Three of the workgroups: WG 2 – Data and Structure, WG 4 – Radio Communications, and WG 8 – Application of AIDC standards, also met at the event. Each of the workgroups discussed the work in front of them and resolved several issues. Here are a few highlights from the different working groups:

Because of increased activities in his business, Chuck Evanhoe had to resign from the WG 8 convenorship. John Greaves, a well-known figure in the global AIDC industry, was appointed to take over this role.

SC 31 and AIM took the opportunity of a very nice social event to celebrate and thank Chuck Biss who chaired SC 31 between 2006 and 2013 and wished him all the best for his retirement. 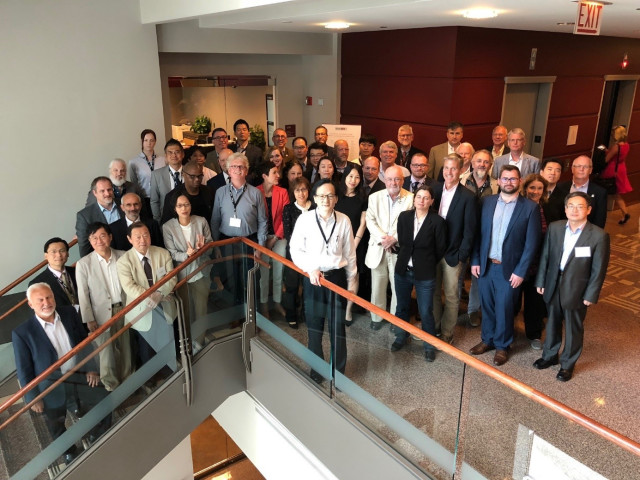 In June 2019, the 25th SC 31 plenary meeting was held in Qingdao, China. Three working groups also met during the week.

Standards specifying rectangular shapes for DataMatrix and QR Codes are under development as well as two new 2D barcode standards including a polychrome symbology. Radio-frequency identification standards are being deployed at large scale. The meeting was informed that IATA announced that RFID would be adopted for baggage tagging worldwide. Application standards for electronic labelling and RFID applied to supply chains were addressed by the committee.

Sprague Ackley and Joo-Sang Park were appointed Convenors for another term for respectively WG 1 on data carriers and WG 2 on data and structure.

The 2020 SC 31 plenary meeting was due to be held in Cape Town, South Africa. Due to the Covid-19 pandemic, the meeting was held virtually. The Heads of Delegations and Working Group Convenors meeting was held on June 11 and the plenary on June 12, with 46 participants from 11 countries, liaison organistions and SC 31 officers.

The meeting agreed to forward to JTC1 the US NB endorsement of Mr. Henri Barthel for another term as SC31 Chair. 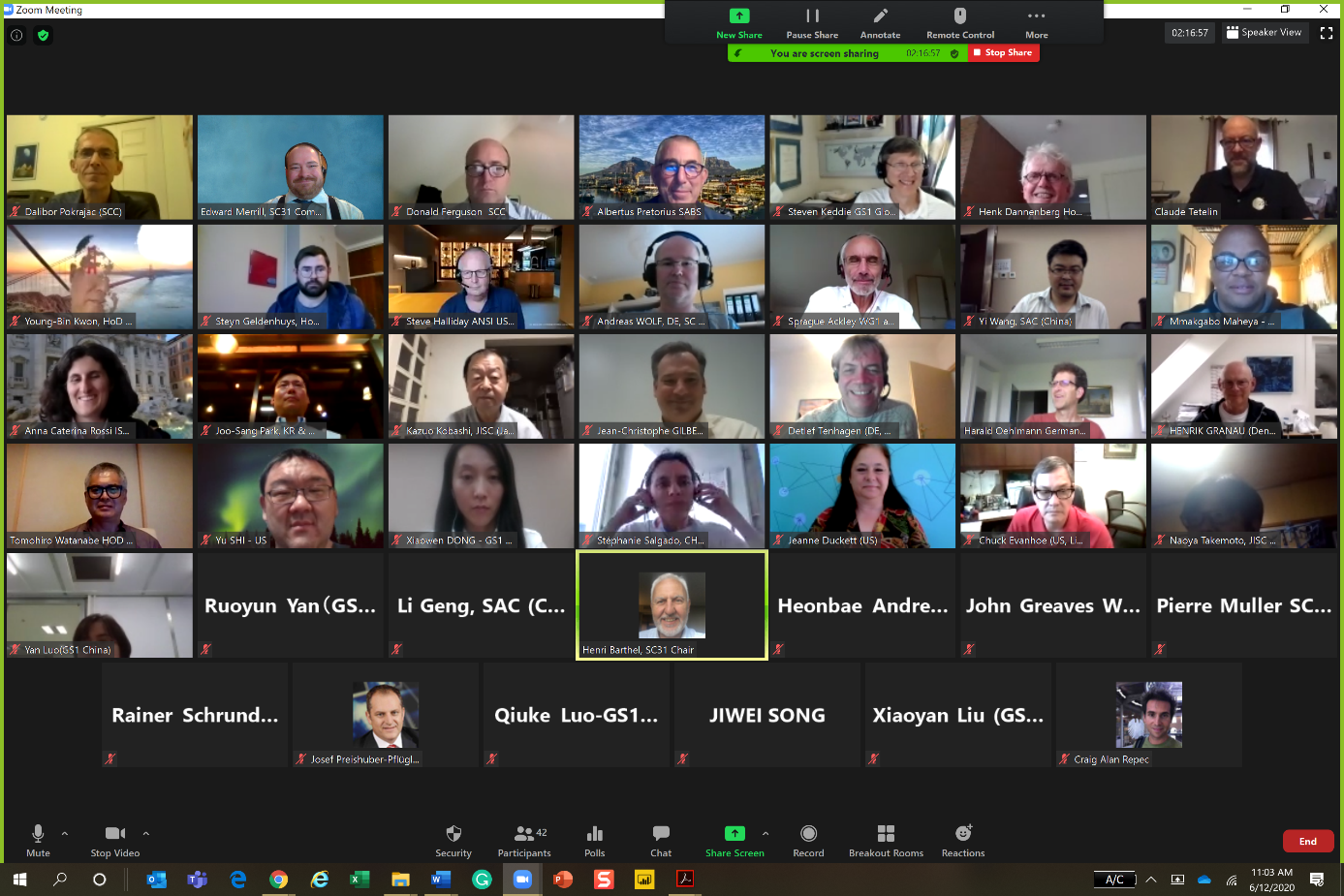